I Am Cuba: A Cinematic Gem 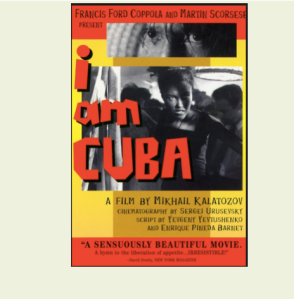 Soy Cuba / I Am Cuba

A week or so ago, we watched a remarkable Soviet propaganda film that was made by the Russian director Mikail Kalatazov in 1964. Co-written by the Cuban novelist Enrique Pinada Barnet and the Russian poet Yevgeny Yevtushenko, Soy Cuba (I Am Cuba) is a strange mix of cinematic genius, poetry, romanticized Cuban history and America-bashing. It is also the only film I have ever seen that is narrated in one language (Spanish), dubbed in another (Russian, which often obscures the Spanish), and then subtitled in a third (English).

The film as a film is mesmerizing. It is exquisitely made in black and white, which not only serves a dramatic purpose but reinforces the melodrama of the film. I Am Cuba opens with a passionate introduction by the narrator to her beloved country as the camera pans from ocean to beach, from village to city. (You can watch the first five minutes on YouTube, albeit without the English subtitles). The film then traces its version of Cuba’s history during the first half of the 2oth century, as the country is exploited by rapacious, drunken, greedy, godless American capitalists who strip the nation of its innocence and self-respect.

As Roger Ebert pointed out when I Am Cuba was first released in English in 1995, the film demonstrates some amazing cinematic feats that were not only distinctive during the era in which they were produced, but would have been tricky maneuovres even in the mid-1990s. This probably explains at least in part why I Am Cuba attracted the attention of Martin Scorcese and Francis Ford Coppola, who are responsible for the film’s availability today. One shot very early in the film (it is part of the clip at the link above) pans across a hotel rooftop high above Havana’s harbour before dropping slowly down to a lower pool deck, where it skims past groups of carefree and care-less (American) tourists before following a sunbather from a deck chair right into the swimming pool – all in an apparent single take. The segment recalls nothing more than one of the many brilliant unbroken shots for which Scorcese himself is deservedly admired. (As far as the feel of the film itself, David Lynch kept coming to my mind.)

Such remarkable panoramas are interspersed with symbol-drenched, wonderfully over-the-top vignettes about individual Cubans whose lives have been stripped of self-respect, income (and almost, in one case, physical innocence) by the American invaders, along with their puppet president/dictator Fulgencia Batista and his henchmen – a combined force that has led them into prostitution, drug dealing, humiliation, despair and destitution. Soy Cuba then depicts, also in highly romantic terms, the bloody and violent student protests against Batista and capitalism, and the rise of a heroic communist leader who changed the course of Cuba’s history in part by broadcasting calls to action to his people from a pirate radio station in the Sierra Maestra mountains.

Clearly, Soy Cuba is not a film on which to rely for an unbiased history of the Cuban revolution, and further investigation on my part will be required. (I was only eleven when “The Bay of Pigs” occurred so I won’t be relying on my memory, either.) More important than its contribution to world history, however is the contribution this film makes to cinematic history. From an artistic point of view, it’s a must-see.

One response to “I Am Cuba: A Cinematic Gem”