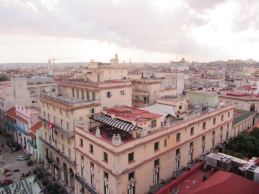 Note to readers: I am posting this first instalment of our Cuban adventure on Thursday, Jan. 14  from Toronto, where we have now safely returned after a fantastic trip. I have been trying to post to this blog since the day after we arrived in Cuba, but internet access in Cuba is extremely difficult – as I will explain later. In the meantime, please keep in mind that the events described in this post happened more than a week ago.

I’ve invited the others who were on our tour to contribute photos or their two centavos’ worth, or to correct any errors I should happen to make (which is extremely unlikely, as they all know. <– joke). It was another great group! On both this trip and the one to India, I’ve been very fortunate in my travelling companions.

I will post the rest of the entries as I have time to finish writing them in the next few days/weeks, so if you enjoy this post, and want to read about the rest of the trip, please subscribe to the blog and stand by…. 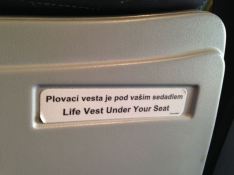 After a smooth flight on a Sunwing plane that we figure was originally owned by a Czech airline (see image to the right), we arrived at the Varadero airport at about 9:30 a.m. this morning (Jan. 3). We cleared customs with no problems, then changed some money into Cuban Convertible Pesos (CUCs, which everyone calls “kooks”). CUCs are one of two kinds of Cuban money; each CUC is equal in value to approximately one USD. There are also Cuban pesos (CUPs), which look a little different from CUCs (they have photos of revolutionary leaders on them rather than monuments) and one of them is worth about 1/25 of a CUC. Cubans use mostly CUPs, travellers use mostly CUCs. So it can get complicated. When you don’t know the difference, as most newcomers don’t, opportunities proliferate for getting ripped off by paying for something in CUCs and getting change in CUPs: i.e., getting 1/25 of the change you are actually due. (Update: No one ever tried to pull this trick on us.) 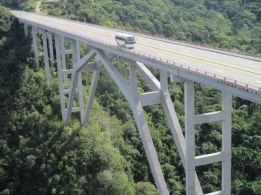 We then caught a Transgaviota bus from the airport to Havana. At 25 CUCs, it was 15 CUCs more expensive than a local Viazul bus, but we got a running commentary from the driver’s assistant and the bus took us right to Old Havana (Vieja Habana), where our first casa particulare (B&B) was located, rather than to the bus station where we’d have needed to find a taxi. 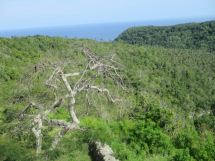 Our first view of the Atlantic Ocean from Cuba, at a stop on the highway between Varadero and Havana

On the bus trip, we learned some very interesting things about Cuba from our guide (who had a dry sense of humour). He told us that: 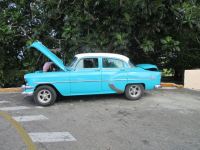 Our first encounter with an old American car in Cuba. Note (typical) location of driver.

The most interesting fact that this guide told us was that if you kill a cow you can go to jail for twenty years. The Internet offers other reasons (and jail terms), but our bus guide told us that it was because the cow saved the country in the late 1990s when there was almost no food in Cuba – keeping many important people alive, including mothers, old people and children  – and so cows are respected and well treated.

Soon after the guide had told us this fact, I asked him what the large birds were that were flying around outside the bus. It turned out they were turkey vultures, as I had suspected, but instead of answering me directly, he told me that the birds were employees of the police department. He explained that if someone does kill a cow illegally, they must bury the bones very deeply. If they do not, the turkey vultures will circle around the spot where the cow has been buried and then the police will follow the turkey vultures to the scene of the crime.

The bus was not able to drive into Old Havana because of the size of the vehicle and the narrowness of the streets, but we were dropped about two blocks from our casa. Our room wasn’t ready so we left our luggage (four floors up! Fortunately our hosts were strong young men who carried everything up for us) and we had a late lunch then wandered around Old Havana for an hour or so. One of the highlights of our stroll was a view of the city from the top of the building on the old square (Plaza Vieja), where I took way too many photos.

Pierre! What are you doing here?

After a nap we met our group and our group leader, Manolo (Manny). There are about 12 of us in the group. Arnie and I are the only two from Canada. The others come from Thailand, Singapore, New Zealand, Australia and England, and their ages range from early twenties to almost ancient (us).  We went for a delicious North-American type dinner at a restaurant in Old Havana (I think it was Ivan Chef Gusto. Is that correct? Manny? Anyone?).

While we were waiting for our dinners to be served (you have to wait for everything in Cuba, especially meals) I looked up, and what should I see high on the wall above us, but a poster featuring Pierre Elliott Trudeau! I felt right at home.

Reconstruction on a building near Plaza Vieja, Old Havana

“The Conversation” – another perspective

Punch and Judy in Plaza Vieja

Mary having an “Are we really here?” moment, having starting the day at 1:30 a.m. in Toronto. At Plaza Vieja, Old Havana

View from our casa in Havana of the street below