Some French architecture, then ¡Che! 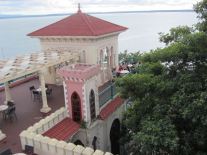 After breakfast, our group set out on a walking tour of Cienfuegos. The city was founded by Don Louis de Clouet, who came to Cuba from France via Louisiana. He worked to build up the city’s white population by inviting families to join him from New Orleans, Philadelphia and Bordeaux. As a result, much of the city’s early architecture is neoclassical French.

Cienfuegos has a more prosperous economic base than many other cities in Cuba (shrimp fishing, thermoelectric and petrochemical plants, and ship building, according to my trusty Lonely Planet), and it is a lovely city with a large port. Its elegant and stately buildings are gradually being restored after years of neglect, thanks to the financial support that has accrued from its having been declared a Unesco World Heritage Site in 2005.

In the main square of the city, there is access to wifi so after our tour we settled in for 15 or 20 minutes of connecting the outside world. Access to the internet is extremely limited in Cuba and estimates of the number of Cubans with internet connections range from 5% to 25%. Most of the connecting is done on mobile phones in wifi hotspots, most of which are located in city squares, and even when they are connected, Cubans’ access to many independent news sites are blocked.

Wifi access cards are 2 CUCs per hour (about CAD 3), and you can use them at any hotspot on the island. The card gives you a user name and a password. We were told that if you use the card for ten minutes and then sign off, you will be able to use the remaining 50 minutes at the same or other locations in future, but several times when I signed off part way through an hour, when I tried to sign on again I was told that I had used up all my time.

Need some help identifying this bldg. Anyone? Anyone? 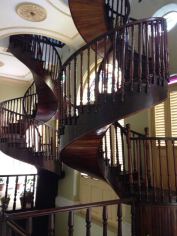 A cigar and rum shop 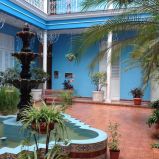 Museo Provincial (I think) as seen from the square 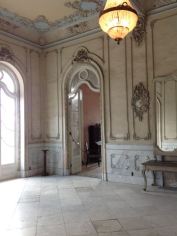 From the roof of the Duarte mansion

From the cupola, Duarte mansion 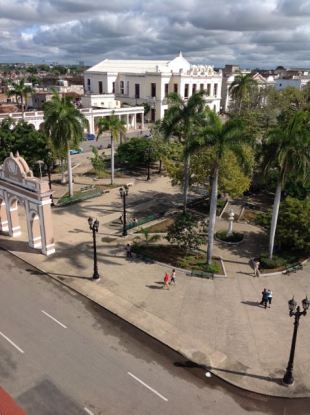 A young woman celebrating her quinceañera

A group of students in the square.

A drink on the palace rooftop

Waving to Arnie from the roof of the Palacio

We then set off for Santa Clara, enjoying a varied and delicious buffet lunch en route at a restaurant whose Don Quixote theme made me very happy, needless to say.

Santa Clara is where the mausoleum of Che Guevara and his friends/fellow revolutionaries is located. In 1967, seven men, including Che, were tracked down and executed in Bolivia, where they were working to instigate an uprising there, but their bodies were not found for several decades. After their DNA had been tested to prove their identities, they were brought to Santa Clara. The location was chosen because it was in Santa Clara that, years earlier, Che and his compatriots had derailed the train that carried munitions and troops sent by Batista to defend the city, effectively spelling the successful end of the Cuban revolution.

The mausoleo complex is a shrine to a man who is more than a hero in this country. It features a towering statue of Che, his arm in a cast – as it was during the Battle of Santa Clara, since he had broken his arm in a battle at Caibarién a few days earlier. The mausoleum itself, which includes an eternal flame lit by Fidel Castro, is so secure that one is allowed to take nothing at all into it – including a purse or a cell phone. The documents and objects that are collected in the accompanying museum are intriguingly specific and detailed and range across Guevara’s life. I could have spent three hours there instead the one we were allotted.

Our guide Manny told us how Che had arrived in Cuba with Fidel, Raúl and nine others on a yacht called Granma in 1956. These twelve were only ones left of 82 who had set out from Mexico with the intention of overthrowing the Batista dictatorship – an upheaval that by then Fidel had been planning from exile for more than five years.

The day was cloudy and as we got back on the bus following our tour, it started to rain. The grey skies seemed appropriate.

Assorted interesting things I have learned today (mostly from Manny):

Field of sugar cane as seen from the bus

We next travelled through some truly beautiful mountainous countryside to Trinidad, which is a charming town on the island’s south shore with an amazing array of restaurants, bars, nightlife and shops – not to mention more interesting history and culture.

Since we arrived after dark, there was no time for sightseeing, but our group met at the foot of the stairs where all the action is. The younger ones went up the stairs to party. The more mature of us (Arnie and I) went for a great dinner in a rooftop restaurant and then walked back to our new casa.

The female head of this household – which includes two school-aged children – is, like our host in Cienfuegos, a warm and friendly woman who wants to help us practice our Spanish. 🙂 She told us that they have friends in Montreal who come down to stay with them every year or two. She also told us that they have never been outside Cuba because they cannot afford to travel (as is the case for most Cubans). For holidays they go to Havana sometimes, but prefer to spend their time at their beach house. She also told us that when she was growing up, they did not teach English in schools, but now they do. Her children are learning to speak English and she believes that this is very important.

We have two nights here, so we feel as though we can settle in a bit.

At our casa in Trinidad 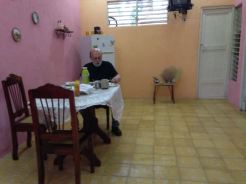