On our last morning on the official tour, we packed everything up, left it at our casa to collect it later, and met the group at the Hotel Ingleterra for our car excursion through the city.  At the hotel, I was told, they were filming an episode of House of Lies. If I’d ever watched the series, I might have recognized someone famous, but I hadn’t and I didn’t. However, one of our group said that Kirsten Bell was there.

Four classic cars had been booked for our Havana tour and we happily climbed into them. Ours was a red 1955 Ford Victoria with a 5-litre V8 engine.  The driver told us that the 61-year-old vehicle had been owned originally by his grandfather, then his father, and now it was his. He told us that the entire engine had been replaced, and that it used 20 litres of gas per 100 km.

For the car buffs among you, I am including an assortment of photos of a few of the old American cars we saw that day. We saw other cars on other days: they are not only in Havana but everywhere in Cuba.

We saw a different side of Cuba as we toured in our convertible beneath spreading deciduous trees through neighbourhoods of middle-class homes in “new Havana.” We drove by the Colon Cemetery (1876) which is historically significant for the range of people who are interred there, as well as for the architecture of its tombs and memorials. I’d have loved to have looked around in there for a while, but we didn’t have time. I understand that it accommodates over a million deceased people and is now full. However, it is still a popular destination, so many of those who have been buried there for a while (three or four years) have to be disinterred and stored elsewhere to make room for the newcomers. I also understand that a lot of the tombs have been desecrated or are in disrepair, especially those belonging to families in exile.

We stopped at the Plaza de la Revolución, which is surrounded by governmental and cultural buildings, to take photos of the huge metal depictions of the faces of Che Guevara and Camilo Cienfuegos, and the José Martí Memorial (109 m tall). The square is 72,000 metres square, and is used for large political gatherings. Fidel Castro (or now his brother Raúl) address Cubans in this plaza at least twice a year. 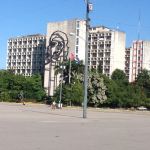 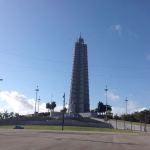 Our next stop was a lovely park named Parque Almendares, also known as Bosque de la Habana (Havana’s forest). We wandered along the edge of the river and enjoyed the overwhelmingly lovely greenery, but we were warned to keep our eyes open for the remains from chicken sacrifices and other unsavoury litter as voodoo is a big thing among some of the park regulars. The area is gradually being restored and revived as part of the Gran Parque Metropolitano network that will offer safe outdoor activities for people of all ages. It is a truly lovely spot.

After parting for the final time from our group at the Hotel National, we wandered down the famous Havana Malecón (the word means “pier,” and the street’s official name is the Avenida de Maceo). The street, promenade and and seawall – which features in every film about Havana, often during storms when waves crash up against the wall and into the streets – stretches for 8 km along the coast. (For information on the bare flagpoles, read this article.)

As the scheduled time for our departure from Havana approached, we caught a bicycle taxi back to our casa, collected our suitcases, and took a cab with another couple to Varadero There, we would spend our last two days in Cuba at an all-inclusive – mostly under gentle medical supervision.